This scholarship is awarded to a local high school student who intends to pursue a career of service to our country and exhibits strong academic and leadership traits, qualities both valued and personified by Commander Pete Oswald. Click here to contribute. 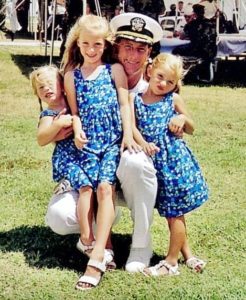 Navy SEAL Commander Pete Oswald was a native of Bellingham, graduating from Sehome High School in 1979, and subsequently graduating from the United States Naval Academy in Annapolis, Maryland. At Annapolis, Pete majored in Ocean Engineering. He was a three year letterman in football and in his senior season was voted to the All-East team at center.

He was serving as Commanding Officer of Naval Special Warfare Unit Four, the Navy SEAL’s element of U.S. Southern Command, in Roosevelt Roads, Puerto Rico, when he died of injuries sustained in a military training exercise that took place in El Salvador on August 27, 2002. He left behind his wife Jennifer and three young daughters.

Pete left an enduring legacy as a person of unassailable character and honor.  He was known for his calm demeanor and uncommon listening skills, his intelligence and wisdom, his unique sense of humor, athleticism, kindness, and his great love for his family and country.

Pete will always be sorely missed by his family and friends, who in honor of his memory and legacy, have established a scholarship in his name through Whatcom Dollars for Scholars.